In the recently published Independent Review of Museums in England led by Neil Mendoza that was commissioned by the Department for Digital, Culture, Media and Sport, one of the recommendations made is that museums should promote deeper and richer engagement with their collections, ‘to make them accessible to the public, not just physically, but meaningfully as well’. I have been reflecting on this idea – of making collections ‘meaningful’ – whilst writing up my notes following a recent visit to Trapholt museum in Denmark.
Trapholt is a museum of art and design in Kolding, Southern Denmark, about two and a half hours from Copenhagen by train. The museum is housed in a modern building and has a vibrant programme of temporary exhibitions, talks, workshops and outreach projects. It has a spacious, light-filled café and a museum shop. The museum’s vision is to be the most engaging, accessible and responsive art museum in Denmark and to make art and design a significant part of people’s lives. At the heart of this ambition is the museum’s collection of nineteenth, twentieth and twenty-first century art and craft objects and furniture that is on permanent display. 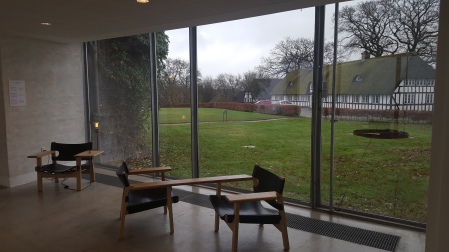 I became interested in Trapholt some years ago when I met the Director Karen Grøn at a conference. In conversation with Karen it became clear that we shared an interest in the value of research within the museum and the challenge of translating theory into practice in our work. We kept in touch and came together (with Berit Anne Larsen, the Director of Learning and Interpretation at the National Gallery of Denmark) in 2015 to co-host a seminar with Danish and UK museum practitioners looking at building research and evidence-based programming in galleries. Together we produced a small publication titled ‘Developing Research in the Museum: Reflections from the UK and Denmark’ that included the papers that had been given in the seminar. Since then I have followed Karen’s work at Trapholt with interest, particularly the programmes and installations she has developed with colleagues that invite visitors to become curators. It is this work that seems especially relevant in terms of enabling museum visitors to make meaningful connections with a collection.
Since 2001 Trapholt has been experimenting with a method they refer to as ‘curating’ to enable all their visitors, including those with little or no art historical knowledge to make personal connections with art works. The most recent and sustained iteration of this is the Your Exhibition display which uses digital technology to enable visitors to curate their own shows. Your Exhibition is underpinned by ten years of research at Trapholt. This research evidenced that the act of curating an exhibition for themselves enriched visitors’ understanding of the artworks and created greater awareness of the institution. They found that curating brings visitors closer to the art, allowing them to invest the works with their own interpretations and meanings. 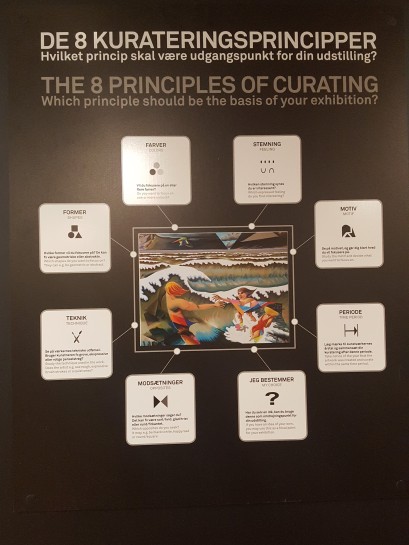 When I visited Trapholt in December 2017 I spent over an hour in Your Exhibition. I chose my own theme and originally selected twelve artworks from the displays, which I was prompted subsequently to reduce to the six ‘that fit your theme the best’, to fill my digital gallery space. I decided on how the items were to be arranged in the space and selected a colour for the walls. I took a photograph of myself to go alongside the exhibition in a booth and gave the exhibition a title. Finally, I projected my exhibition onto a large wall in the display space and elected to have it emailed to me. 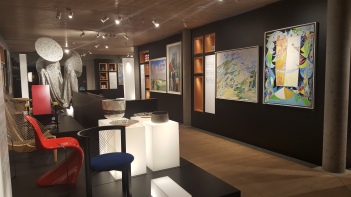 It was a compelling experience, not least because it prompted me to spend time looking closely at the objects, imagining how they might work alongside each other and considering how they would illuminate my chosen theme. It involved me in making decisions, at times prompted by the questions that popped up during the digital curation process, which I frequently revised as I tried out my ideas. It challenged me to think hard and gave me a real sense of satisfaction once I had produced the final show. It also made me pay greater attention to the displays in the rest of the gallery after I had finished. 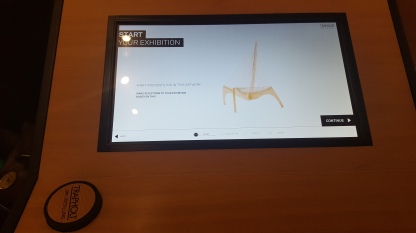 Reflecting on Your Exhibition, two things have struck me particularly. The first is that the attention to detail in the display reveals the depth of thinking and research that has gone into its realisation, from the tone of the questions to the physical materials used. The intervention manifests Trapholt’s commitment to understanding their audiences and devising ways of supporting visitors to actively and joyfully engage, irrespective of their level of art historical knowledge. My second observation is that Your Exhibition invites the visitor to embark on a process of enquiry, to test out ideas, experiment and develop new knowledge. In effect, Your Exhibition invites the visitor to become a researcher of sorts.
Perhaps this is what is needed to make collections ‘meaningful’?